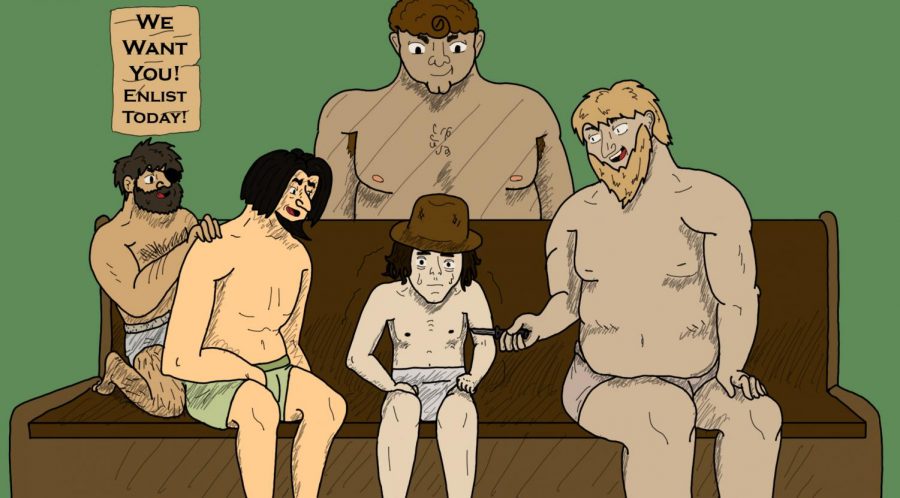 An illustration referencing the movie scene in the draft office. These criminals seem tough at first, but they warm up fast. Soon they are all talking about their various crimes and having a great time. (https://www.youtube.com/watch?v=b0a6iWHSWbA&feature=youtu.be.

To this day, many radio stations still play the song on Thanksgiving. Maybe because it is one of the few Thanksgiving songs out there, but I think there is more to it than that.

“Alice’s Restaurant Massacree” by Arlo Guthrie, is a ride. The 18-minute song can effectively be broken down into two separate parts. The first half is based on a true story from Guthrie’s life where he was arrested for littering on Thanksgiving day. He was staying with Alice and Ray Brock for the holiday and decided to clean out their house. (They lived in a church; this is important later). They loaded the garbage into a VW Microbus and set out for the dump, only to find it closed. Luckily, Guthrie remembered a side road where they dumped their load. The police later found an envelope with “Brock” on it and arrested them. They were fined and that was that.

The second half however, was completely fabricated. It involves Guthrie being drafted for Vietnam and intentionally acting unhinged to get out. “I wanna see blood and gore and guts and veins in my teeth. Eat dead burnt bodies. I mean kill, Kill, KILL, KILL.” Of course this backfires and it looks like he is going to be drafted until… they come to his criminal record. Turns out everyone, from the military to (and I’m quoting the song here) the “mother-rapers,” “father-stabbers,” and “father-rapers,” are disgusted by his heinous acts. He ends the song with a call to action, telling people to sing this song to stop the war. At 19 years old, Guthrie had written his most popular song.

According to Arlo Guthrie’s website, “Arlo is a natural-born storyteller, whose tales and anecdotes figure prominently in his performances that helped define the ‘Folk Boom’ era.” Born in 1947 to Marjorie Mazia Guthrie, founder of The Committee to Combat Huntington’s Disease (later renamed Huntington’s Disease Society of America) and singer, songwriter, and philosopher Woody Guthrie, Arlo was raised in an interesting environment. He combined his father’s music with his mother’s humanitarian interests and made them into his own style, then added a little dry humor for good measure. Many of his songs are based on stories from his life that were then exaggerated to make a point. Such as “Alice’s Restaurant Massacree.” Guthrie had never expected it to be a hit, especially with the length. He was quickly proved wrong.

A year after the song was recorded, Oscar-winning director Arthur Penn approached Arlo Guthrie for a possible movie adaptation of the song with Guthrie in the lead role. At this point no one believed it was a true story, but by some weird coincidence, Penn owned a summer house in Stockbridge, Mass. where Guthrie’s arrest happened. He recognized the story from the news. You cannot make this up! They even got the real photographs used as evidence in the court case and the real-life blind judge. And, to top it all off, when the local police officer heard about the movie, he insisted on playing himself. (“If anyone is going to make a fool out of me, it might as well be me!”). Now, it does not follow the song exactly because Penn modeled the movie more off the news reports but even then there are scenes I didn’t quite understand. Like the multiple “love” scenes (one of which involves an air compressor) and the subplot about dirt bike racing (the source of the air compressor). I was actually disappointed in how serious this movie was, despite its source material. The wit of the song was still there, but only in the narration taken directly from the song. At times it seemed to drag, like they needed to fill time between events. Overall, I think Arthur Penn did a great job with the little he had to work with in the first place. Either way it is amazing a song could have so much impact in such a small amount of time.

Speaking of impact, this song was huge. It seems like it came out at just the right time. Vietnam was in full swing, and the youth were sick of it. Many other musicians had said their piece but what made “Alice’s Restaurant Massacree” different was its use of humor. It spoke in a way few other songs did and inspired people to fight the system. Including famous rock stars like Ted Nugent and Bruce Springsteen. “I pulled the whole ‘Alice’s Restaurant.’ ‘I’m sorry, sir. I don’t understand what you are saying because I am high on LSD,’” Springsteen said. Alice Brock, the one who owned the restaurant, has an art gallery which was featured in the Wall Street Journal. The church where she used to live was bought by Guthrie and turned into the “The Guthrie Center,” a non-profit community help center.

I would strongly recommend this song. Surprisingly enough, despite the incredibly dated subject matter, the humor still holds up. Who would not find it funny when a bunch of hardened criminals are completely disgusted by the simple act of littering. Or when the police treat it as “the biggest crime of the last fifty years,” just so they can use all their fancy equipment. The movie on the other hand, could be passed up. In a way, both the song and movie could be enjoyed independently. You need no knowledge of the song to understand the events of the movie. However, unlike the source material, the film has none of the lasting power. Unless you are an Arlo Guthrie fan, there is not enough of a reason to see the movie. So, if you have 18 minutes to spare, take a trip to Stockbridge, Mass.,and mind your garbage.