A first time for everything 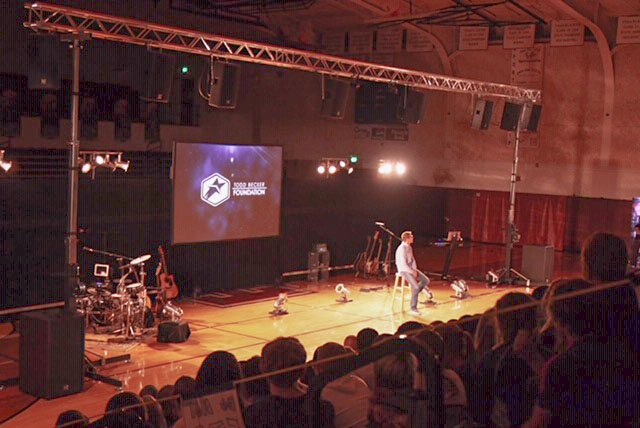 On Feb. 6, 2005, just over 14 years ago, the car that Kearney High School senior Todd Becker was riding in struck a parked pickup, totaling the car, and killing the backseat passenger. Becker participated in baseball, football, and pole-vault in high school, but in a matter of minutes, both his sports career and his life ended. So what does a fourteen-year-old accident have to do with today? A whole lot, thanks to Todd’s older brother Keith, creator of the Todd Becker Foundation (TBF).

“As I looked into the backseat and saw Todd laying there dead, I realized that the only thing that mattered was that he would stand before God and take responsibility for his life,” Keith Becker said. In the year leading up to his death, Todd had found a fake I.D. that he used for buying alcohol. When the car crash occurred, his blood-alcohol content was nearly three times the legal limit “I was drinking and partying and making the exact same choices as Todd,” Keith Becker said. “And I realized that nothing I was doing could fill me, and that if I continued, I might end up just like Todd.”

So Becker set out to change his own life, and it led him to see the need that everyone else had for this change as well. “I was saved that same year that Todd died, and at that point the motivation became about pointing others away from those same decisions that he had made,” he said. The operation started small, but in its 13th year of operation, TBF has been to over 750 public schools in 15 states. “We’ve been to [public] schools as far as New Mexico, Arkansas, and Montana,” said Becker.

For the first time ever, on Feb. 27 this year, the foundation will be coming to North Platte High School. “We’ve been to just about every school in the area, Sutherland, Maxwell, Brady, Mullen, Gothenburg, and more, but this is the first time that we’ll be coming to North Platte and we’re grateful for the opportunity,” said Becker. The school feels that it is practical to bring groups like TBF to the school to provide a different approach to students. “As a parent and someone who has been personally impacted by wrong choices, I really see the magnitude of decisions made while you are young,” said school board president Mike Morrell.

Usually Becker is permitted to give two assemblies in the school. The first one is more straightforward, calling students to follow the narrow road from Matthew 7:13. The idea is for students to feel the need to turn away from the things that will only excite for a little bit, but will lead to making poor life choices and maybe even death, as it was for Todd. However this time, Becker will only be giving the second assembly which focuses more on God and how He has led Keith to live better. Keith’s goal is to explain how God can do the same for any student who chooses to believe it. The foundation also travels with the band Chye who holds a concert before the assembly.

Becker also says that they’ve seen incredible things, like kids deciding not to commit suicide and choosing not to shoot up a school. “But the greatest miracle of all is just seeing one person, boy or girl, decide that they don’t want to make those choices anymore, the kinds that will lead to death like Todd’s did, that’s a real miracle,” Becker said. Though the main reach of this event is students, everyone is welcome to attend, “The Todd Becker Foundation has a positive way of encouraging people to make the good, tough choices that go against the crowd,” Morrell said.