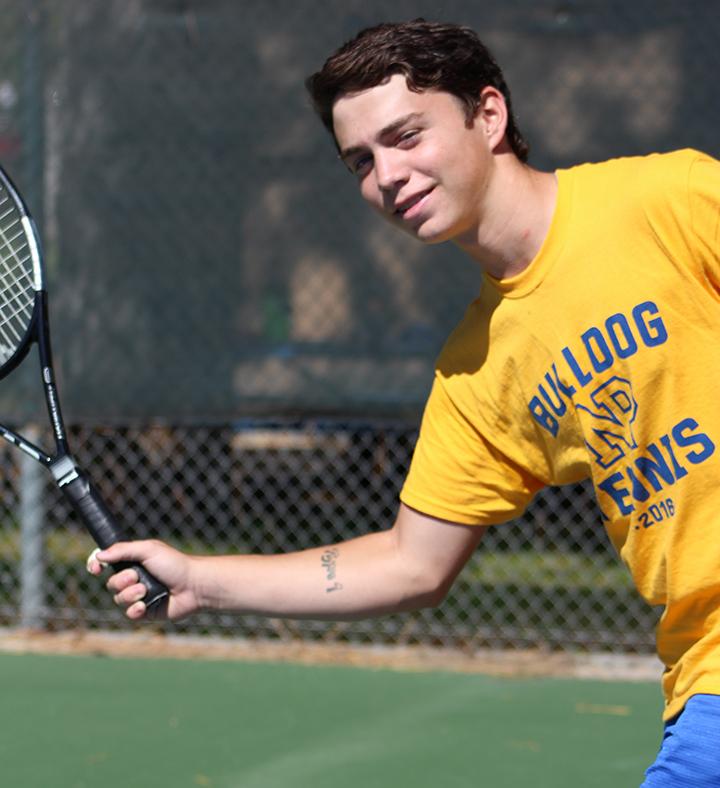 Senior Joe Roessler, started playing tennis his sophomore year. “I didn’t have any friends when I started playing, and I wanted to stay active,”  Roessler said.

Along with learning a new sport, Roessler had to overcome another challenge, Type 1 diabetes. He was diagnosed with Type 1 diabetes his freshman year. He started drinking a lot of liquids and felt really tired throughout the day. He had to use the bathroom a lot. “I had a really high fever, so my mom took me to the hospital,” he said, “and they took my blood sugar. My blood sugar was 760,” he said.  Roessler was only concerned about one thing, his athletics. “I was really bummed about it because I thought I wouldn’t get to play sports anymore,” Roessler said.

Before every match and practice, Roessler has to check his blood sugar to make sure everything is going well. “I have to take insulin shots before I eat, and it gets in the way sometimes,” Roessler said. Roessler has to keep snacks on hand for emergency purposes to keep his blood sugars stable. “One time at Freddy’s after a meet, we were getting our food and Joe lifted up his shirt. He grabbed his insulin pen and stabbed himself in the stomach,” teammate Bryce Lee said.  “It was awkward because I didn’t realize how big of a pain it could be to have diabetes.” Some have even noticed a tattoo on Roessler’s right arm with the words Type 1. “Me and my mom thought it would be a good idea, in case my blood sugar ever went too low and someone needed to know what was happening,” Roessler said.

Roessler was able to play in a varsity dual against Alliance on September 24. Since he hasn’t had very many opportunities to play in a varsity match, he was overjoyed. Boys’ tennis coach John Lehmer recognized Roessler’s improvements and had put him in at a varsity position. “He’s so much better this year than last,” Lehmer said.

With  Roessler’s disadvantage, he has learned to overcome, push through, and conquer his challenges. With very little experience to begin with as a sophomore, Roessler still managed to win his varsity match. Roessler said,  “You don’t have to let it bother you, you just have to deal with it.”