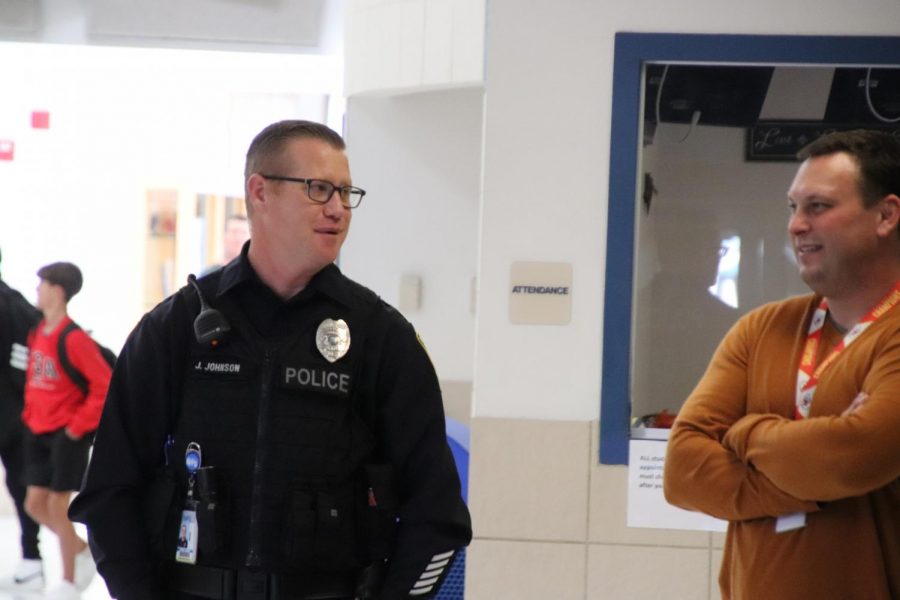 Officer Johnson has a conversation with Keith Lloyd, a science teacher.

School Resource Officer (SRO) Jeremiah Johnson is a familiar face in North Platte schools. “My first law enforcement job was in Warner Robins, Georgia, which is just south of Atlanta,” said Johnson. “I got hired on with the State Patrol here in Nebraska, so I moved back up [to Nebraska].”

With the Nebraska State Patrol, Officer Johnson did many different jobs. “I was a trooper for about 14 years. When I was a trooper, I did a couple years of traffic services. They are the troopers you see driving around,” Johnson said. “Then I did six years of undercover narcotics and four years of being a service-dog handler. Within the span of those ten years, I was also on the state SWAT team.”

Johnson started his military career with the United States Air Force. He joined the 78th Security forces division, and was assigned to a plane called the JSTAR. (Joint Surveillance and Target Attack Radar System) “When I was in the military, it was the only aircraft the military had that could do these capabilities,” said Johnson. “It’s a spy plane.”

School resource officers have many different things that they do on a day-to-day basis. “The obvious one is any crimes that take place on school property, so any crimes directed towards [it],” Johnson said. “Out of all the district if a kid shows up and has bruises or something like that, we need to think that’s child abuse or neglect.”

“A lot of what school resource officers do would be ensuring that the schools are secure. So, a lot of that is going over security measures. An example of that would be the alarms on the doors,” Johnson said. “It’s not something that would happen overnight, but you have to make plans for them and such.”

Johnson wants students to know that his office is always open, and that he wants to respect student’s privacy and not insert himself into situations without cause. “I want to help when my help is needed. I don’t want to get involved with students on a level like that unless they really need me,” Johnson said. “I’m not there looking for stuff all the time.”

Johnson says that the kind of counseling that he can provide to students is more of an informal type. “If someone has too much schoolwork and they’re stressed, [I just] talk with people,” Johnson said. “If students are stressed about school and home, I’ll look at their school schedule, their attendance, and just see if there’s something in there where I can help build a structure with those students.”

Johnson may not be the greatest morning person, but there are a few things that help him stay focused and work to be the best he can every day. “There’s someone that needs me. You know, something that is little to me could be really, really important or helpful [to a student].” said Johnson.

“My office door’s always open. If I’m in the hallway, [students] can always approach me. I want [the students] to know that I am here for each and every one of them,” Johnson said. “If any of them need help with anything, whether it be home life or school life. I want them to succeed.”