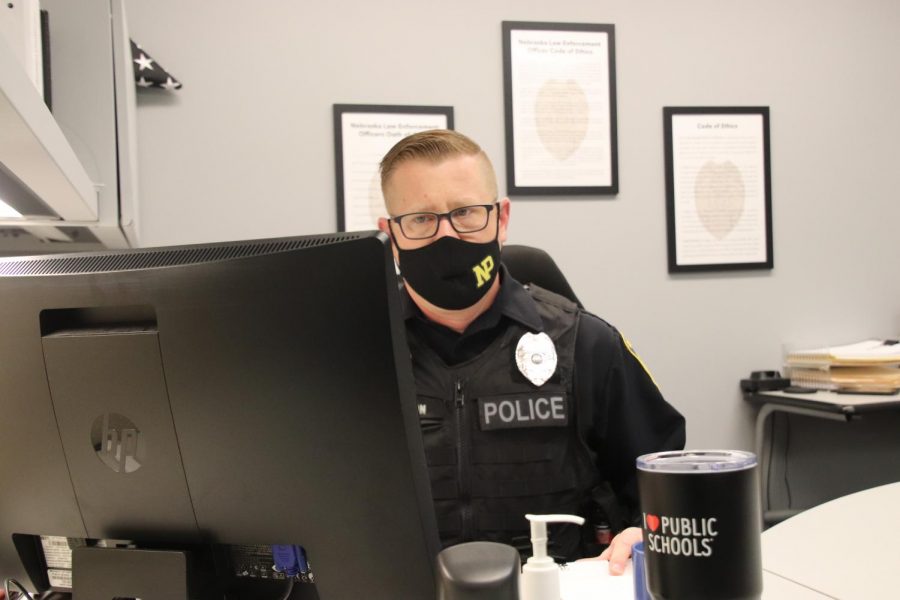 School Resource Officer Jeremiah Johnson writes notes as he reads an email from his computer on Monday, March 22nd.

re followed around while they were doing their jobs for 18 months for an episode of The Mind Inside Film.

Filming started back in January of 2019 when director Salley Nelson Barret and co-director Andy Marinkovich were contacted about the mental health issues North Platte Public Schools faced “when I got there, I was in awe,” Barret said.

The film showed many success stories and spotlighted many different individuals. “ I think that it just goes to show the success of getting interventions in place,” Johnson said.

Even though the film is 50 minutes long, it does not show all of the hard-working people in the district. “The district is willingness to show up for kids and families and to go above and beyond what anyone should, expect is outstanding,” Barret said.

The film shows what struggles many students and the community face. One of the director’s goals was to start conversations. “That’s the whole reason that we do this,” Barret said.

Many people have their own pace they like to work at but when you are being filmed that all changes “It was really, really exhausting,” Buscher said.

Many people don’t see how underfunded public schools are and

try and get better communication between resources. “We don’t always know what happens with those calls,” she said.

Some students don’t know all of the helpful resources

available to them and this film puts a light on them for students. “You’re not alone,” Buscher said.

Many students face similar challenges and struggles that are shown in the film. “ I think this is something that we can unite in,” Johnson said.

Some people are surprised when they watch the film because many people don’t realize the issues our community faces. “We kind of work through this together,” Johnson said.

Currently, the I Love Public Schools team is working on the third episode of the series “Education In The Time of Covid” and they invite students to submit stories on how COVID has affected them on their website. The story may be posted on there Facebook Or Instagram. The film crew also has plans for an addition to “The Mind Inside” episode.

The “Mind Inside” episode 3 and all other episodes can be seen at iloveps.org.