The NPHS musical cast prepares for this year’s show “Ranked” 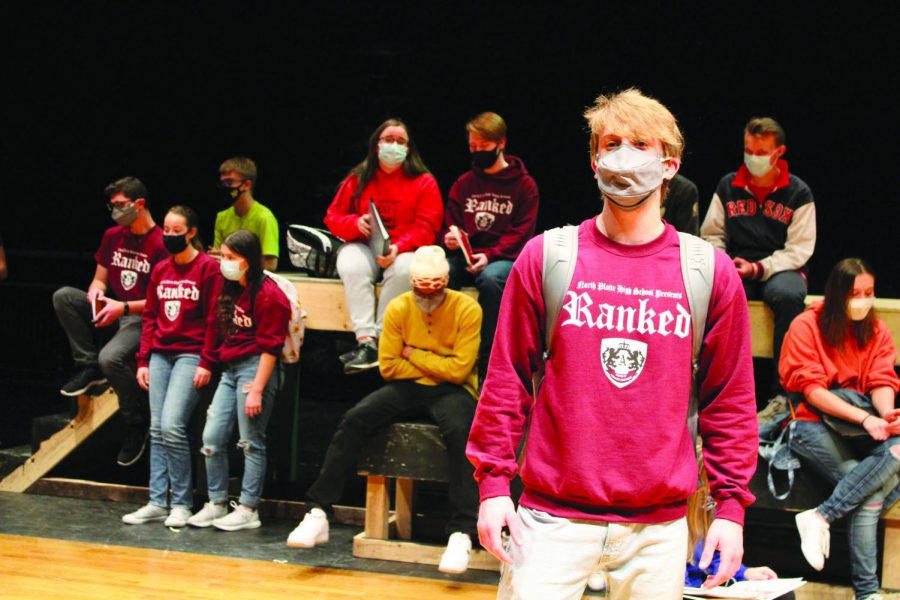 Senior Caedmon Hoaglund looks to the audience as he sings while his character’s peers talk among themselves in the background. This year’s musical production is the story of a semi-distopian school system that heavily ranks students, causing tension and anger between the Above and Below average students. This is the musical’s first year being performed by any anyone, giving NPHS students the freedom to mold their own way with their characters. “It’s easier for me to create [characters] from scratch than it is to know who they are, because then you have you have expectations that you need to follow through with,” said senior Faith Miller.

An abrupt end brings new inspiration to the North Platte High School’s musical cast.
This year, the North Platte High School’s musical is “Ranked”. In this dystopian story, high school students compete in the “Rank Redemtion” competition to stay “above the average” or be forced into the shadows of their perceived-to-be superior classmates. The story sheds light on the struggle the students feel, and how that leads to the downfall of the school’s student ranking system.

Written in 2020, by a group of teachers in Granite Bay, Calif., musical director Leah Purdy said NPHS will be one of only around 20 productions worldwide that will have performed the play. Being one of the first to perform the musical, not only Purdy, but members of the cast as well, have been able to push themselves more than they have in past musicals. Because of this, they feel as though they can take more creative liberties with the script and character development.

“It’s been fun and exciting,” said Purdy. “It’s really pushed me to think outside the box.”
Without the pressures of professional actors’ performances, many cast members feel like they can mold their character into something their own, without feeling like they have to live up to anyone. With the characters being teens in high school, they also feel like they can relate to them and are able to better play the character they’re trying to portray.

“When there’s nobody that I have to live up to, I’m living up to myself, which is great for me,” said senior Jonah San Miguel “I don’t feel like there’s any weight on my shoulders. I can do whatever I want with this character.”
Last year, North Platte High School’s production of “West Side Story” was unable to perform live after the school’s COVID shutdown in March. To finish out the season, they were able to perform the musical through a live stream. While senior cast member Caedmon Hoaglund found last year’s abrupt stop and the production’s inability to perform live disappointing, he and many other cast members have a newfound motivation to push themselves harder to tell this year’s story.
“You never notice how good something is until it’s gone, and I took that for granted,” said Hoaglund. “It’s such an amazing feeling and I missed that. I’m really excited that we get to do this.” Performance dates are March 19, 20, and 21 at 7 p.m. Starting March 1st, tickets will be available for purchase on ShowTix through the school’s website, Facebook and Twitter accounts.