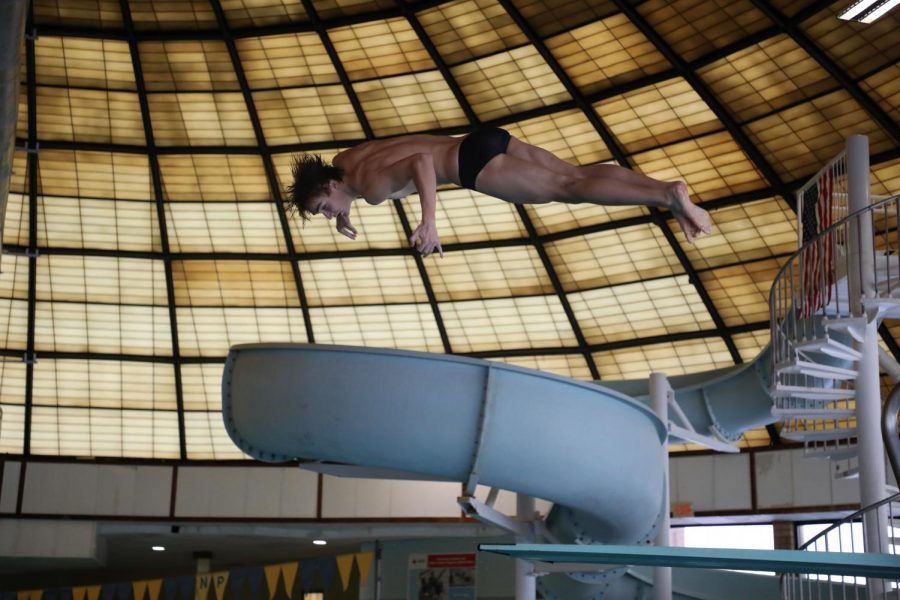 Senior Jonathan Brouillette performs at the home meet at the Recreation Center on January 28.

Imagine doing a double front flip off a slippery diving board in front of tough judges and an audience into the clear blue water of a pool three feet below. Imagine never making a splash.

Senior Jonathan Brouillette sits at the number one spot for diving in the state. He holds nearly 50 points on the other divers with a point total of 504 points. Brouillette will be competing at state on Thursday.

Brouillette started diving in his freshman year of high school, but before that, he was practicing flips in public pools and on his trampoline. “During summer it would get really hot, too hot to do flips on the trampoline and so I’d go to Cody Pool and I would do doubles off the boards,” Brouillette said.

Brouillette is a great motivator to other divers  “His tips helped and pushed me harder because I saw how good he was,” junior Jack Oettinger said. Brouillette remembered how he was treated by the seniors his first year and tries to hold himself to that. “I think it’s such a nice community. My freshman year I felt so welcomed by the seniors. They would help me out, show me out to where the pool is,” Brouillette said.

In diving, students start the season competing six different dives, by January they must complete 11. Brouillette has set new school records for his diving, including setting a conference record for the GNAC conference championship. “My sophomore year, I broke the 11 dive school record, which was from 2000,” Brouillette said, “This year I have broken the sixth dive record which was from 1999, then I re-broke my 11 dive record.”

Training for dive is difficult for the divers over the off-season because there is no dive club or any way for them to practice all together, but this does not stop Brouillette from keeping up with his practice. “I don’t have an opportunity to dive as I would normally during the summer or outside of the season so I spend a lot of time in the summer on my trampoline doing drills.” Brouillette said.

Brouillette goes to camps in the summer to perfect his skills. “After my freshman year, I went to a camp, and that was the biggest change in my diving. I improved by about 90 points,” Brouillette said.

Despite his accomplishments, Brouillette likes to joke about being the least athletic person of his friend group. “I’m a Division I commit, but still the most un-athletic in my friend group,” he said, “God forbid you throw a football at me; I will not catch it.”