You never know until you try it. 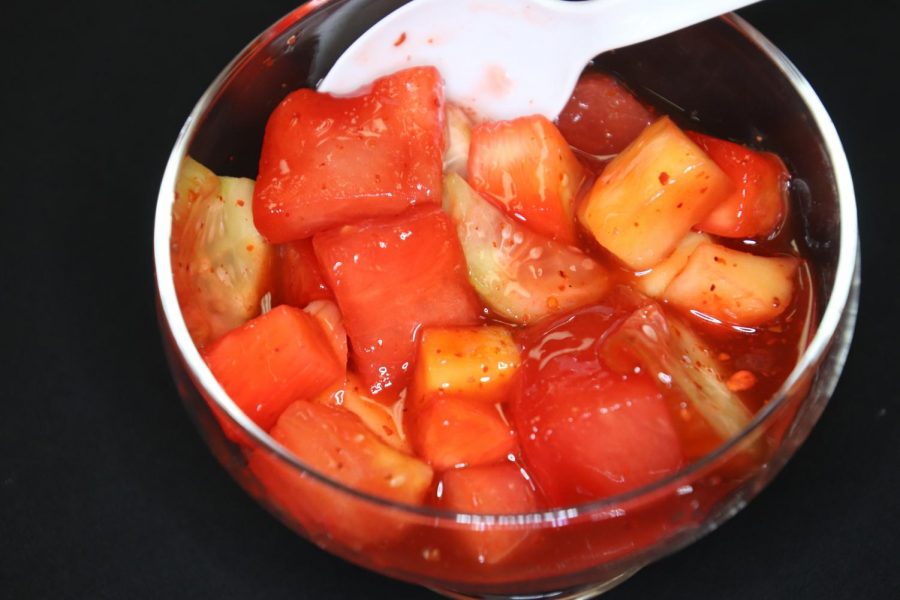 A close up of the mexican fruit cup with chamoy and tajin.

What do, tuition, and The Bulldogger’s managing editor have in common? Senior Priscila Mondragõn is following in her family’s tradition by making and selling homemade Mexican fruit cups to her friends to earn money for college.

Mondragõn posted an advertisement selling the Mexican Chile fruit cups in late January and has sold more than she expected. “At first I just posted it and thought that only family members would want it,” she said. “It got more attention than I thought.”

The Mexican fruit cup looks like any pre-packaged fruit salad you’d find at the store.  It has cut up bites of watermelon, cucumbers, pineapple, and mangos. This fruit also has Tajin chile-lime powder and a red topping that looks like Chinese sweet and sour sauce. The sauce is called chamoy; it’s a Mexican condiment made from fruit and chiles.

You would think the chamoy sauce and the Tajin would make the fruit hot and spicy, but it doesn’t. It’s like salad dressing for fruit.  The sauce is a little acidic and slightly salty with just a hint of heat. The dressing compliments the fruit well. And the sweetness is balanced with the other flavors.

I had never had a Mexican fruit cup before. Priscila is my friend, and I didn’t want to insult her, but I was initially skeptical because I thought it wouldn’t taste good. Truth be told, I judged it by its looks. I thought it looked gross. When I first saw the chamoy sauce on the fruit, I thought the watermelon had melted, and I didn’t think that cucumbers should go in a fruit salad.

Trying it changed my mind. It’s delicious in a new way I’ve never experienced. The flavors blend together forming a new healthy treat. I don’t think the sauce is gross anymore. I think it’s unique and exciting. I’m glad I tried a portion of new cultural food.

I definitely recommend Mondragõn’s Mexican Chile fruit cup. She makes them fresh, any way you like them, and will deliver. The grab‘n go snack costs $5. It’s worth it because it’s healthy for you, and you can eat it any time of the day. I also personally like supporting a friend’s business and helping her be able to pay for college.