NPHS student aspires to have a successful YouTube channel. 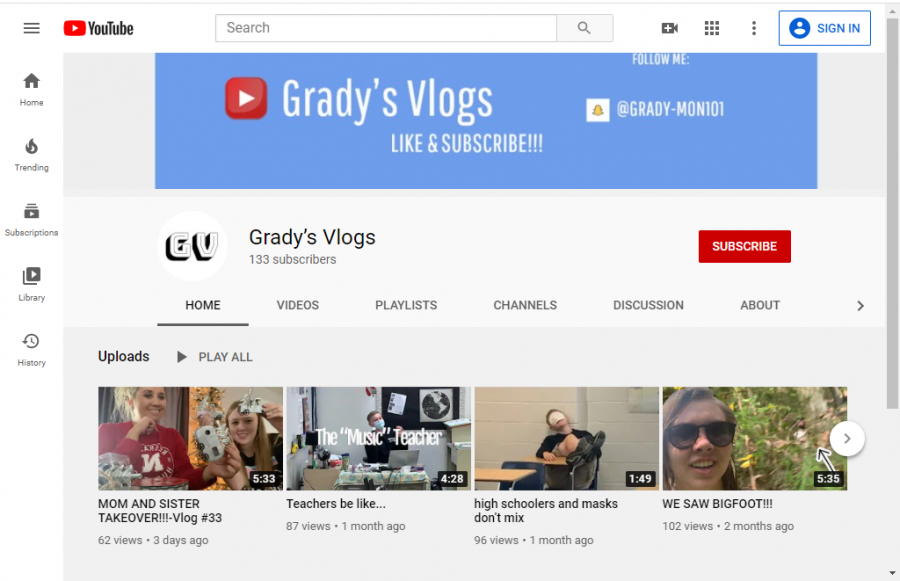 Sexson's channel has been around for over a year. He has around a total of 80 videos.

Cody Ko. Mr. Beast. David Dobrik. You’ve probably heard of these YouTubers. Most kids at some point in time wanted to do what these people do. Sophomore Grady Sexson is no different. “I’ve always wanted to do it throughout middle school,” he said. “Starting freshman year in a new school made me think, ‘Hey, I might start this out.’”

Sexson’s channel hosts over 80 videos with a wide variety of content. His videos range anywhere from vlogs featuring his friends and family, to stereotypes of high school students and teachers. He has spent countless time filming and editing over 30 vlogs.

Most people think that cranking out YouTube videos everyday isn’t that hard, but according to Sexson, that’s most definitely not the case. “I started to post everyday for like two months, then I kind of realized that my videos were crap,” he said. “I started to post, like, once a week and actually make my videos better.”

When shooting videos, YouTubers have to choose what to record with. Some YouTubers spend more to buy a really nice camera, whereas others would rather use their phone. “I pretty much just use my phone to film and edit the videos,” said Sexson. “It took me a long time to figure out a good app to use because there are things I want to do that some apps won’t let me do.”

The difference between many kids’ dreams and Sexson’s goals is that he doesn’t know if he would want to make this a full-time thing.  “Even if I get big, there are so many other things that I want to do job-wise,” Sexson said.

Now, just because he doesn’t want to make it a career, doesn’t mean he doesn’t have hopes for his channel. He  plans on continuing to pursue this longtime goal of his by shooting more videos. “It would be cool if it did go further [as] a real job, but I’m not really aiming for that,” said Sexson. “The one goal I really wanted to reach was getting a silver play button which is 100,000 subscribers.”